The Python SDK is a plugin allowing Python scripts to interact directly with Unreal Engine objects. This opens up many new avenues for modding, from simply allowing modifying dynamically generated objects to letting modders run arbitrary game functions whenever they please. SDK mods are a superset of “regular” text mods, they can do all the same things plus more.

Installing the SDK is rather simple. The exact same release is compatible with both BL2 and TPS, as well as both Steam and Epic versions of them, these instructions apply to all of them.

Updating the SDK works much the same, though note that occasionally you may have to delete files from older versions.

A few mods are installed with the SDK by default. One of these replaces the DLC menu with an in-game Mods menu. Seeing this menu means that the SDK is properly installed.

The Mods menu is primarily used to enable/disable mods, but each mod can also define additonal actions you can perform there. 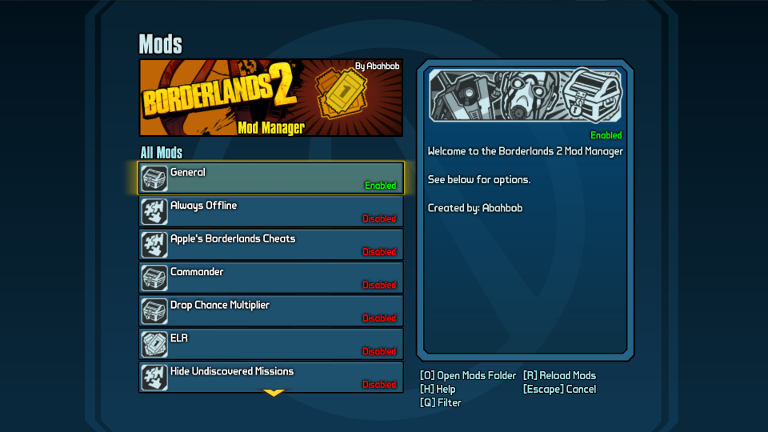 There’s actually a central database for SDK mods, hosted over at the PythonSDK Mod Database

Instead mod downloads themselves tend to be stored in the author’s own repositories. You might also want to join one of the community discord servers and pay attention to their mod downloads channels.

All SDK mods are installed into the Binaries/Win32/Mods folder that you extracted when installing the SDK. You can either access this through Steam the same way you originally found it, or by selecting the “General” mod and pressing ‘O’.

Each mod is placed in it’s own folder. This folder needs to contain a file __init__.py, and it may also contain other files. This file is something the mod author needs to define, if you couldn’t find one you can’t just create your own one. Usually when downloading an SDK mod this folder structure will already be setup for you, you’ll just have to copy the folder into the Mods folder.

There is not yet a lot of documentation on writing SDK Mods, it’s best to learn by looking at existing mods. If you need help you can always ask in the PythonSDK discord.

Unsurprisingly given the name, you will need to be at least somewhat proficient with Python, specifically the SDK currently uses version 3.7. There are many good tutorial series teaching it available online, though you will always still have to get used to the exact way the SDK works.

Something else good to do when writing SDK mods is to decompile the game’s UPKs. This will you let you view all the UnrealScript functions and most of the source code behind them, greatly helping development.